The parish of Monkton Farleigh is situated in the extreme north western bend of an isolated chain of hills, at one end of which is Bradford on Avon and another Chippenham. The ground on which the village stands is from 6 to 700 feet in height (733 feet at the Tower on the Down). There is woodland in the south west corner of the parish, as well as small clumps of trees in other places. There is a park and avenue of elms adjoining the Manor House. The village is situated on high ground in the centre of the parish (four miles north west of Bradford on Avon and five and a half miles east of Bath). The village still commands some fine views, especially eastwards. There is sand and clay in the parish, but the soil is generally known as the stone brash. The quarries of freestone are a peculiar feature of the upper or west end of the parish. The A363 from Bradford on Avon to Bath passes through Farleigh Wick, a hamlet at the southern end of the parish. Sir Charles Hobhouse, in his history of the parish in 1881, stated that “probably in all Wiltshire there is no place where the combination of scenery – hill and valley, wood and stream, distance and home views is more varied and beautiful.”
How to increase buttocks fast, in a month, the most powerful exercises – locura fitness test and deca cycle for sale multifunctional gym equipment exercise fitness barbell.
A Roman camp existed on Kingsdown (Roman villas have been discovered nearby at both Bathford and Box), At the north west angle of the parish (the boundary with the parish of Box) there are traces of the Roman road from Bath to Marlborough. The Wansdyke runs from west to east a little to the north of the Manor House, though the traces are not very distinct. There are further Roman remains at the extreme south of the parish in the hamlet of Farleigh Wick, in a plantation called Inwoods, where there are large blocks of hewn stone, presumably the remains of buildings and Roman coins have been found from the time of the Emperor Antonius (AD 142 – 152). It has been conjectured that the Romans first began to visit this part of Britain at this time. On 3rd May, 1980 a householder in Monkton Farleigh discovered a total of 3, 466 Roman coins together with an earthenware pot. The coins range in date from the reign of Valerian I (AD 253-60 to early in the reign of Diocletian (AD 284-305). There is also a tradition of a British Settlement.

The first spelling of the name is Farlege, then Farley and latterly Farleigh. The name Monkton was probably given by the monks, partly to distinguish it from Farleigh Hungerford in Somerset, but principally to mark their proprietorship.

In the Doomsday Book the Manor of “Farlege” is mentioned as held by Brictric and “of him to his brother”. The first recorded ancestor of Brictric was Aylward Mere, a Saxon nobleman of royal lineage. The Manor of Brictric subsequently passed to the Bohun family. In about 1120 the Manor was in the hands of Humphrey de Bohun II, who announced in a Charter his intention of bestowing the Church at Farleigh upon Cluniac monks as a Priory. His son Humphrey Bohun III later gave or confirmed the Manor of Farleigh to the Priory. Opinion is divided as to whether the second or the third Humphrey Bohun founded the Priory, but it seems most likely that the first commenced and the second completed the foundation. The Heads of the Bohun family continued to be looked upon as patrons and protectors of the Priory in secular matters. The Manor remained in the possession of the monks until the Dissolution of the Priory in 1535.

The Priory was of Cluniac monks of the order of St. Benedict and was dedicated to St. Mary Magdalene. They were subordinate to the great Priory of Lewes in Sussex. Very little of the buildings of the Priory are left and nothing of the conventual Church but the site. In original condition (completed approx. mid 12th century) the architectural style would have been partly Norman, partly early English. The spring which supplied the Priory is sheltered by a small, stone roofed thirteenth century building called the Monks Conduit (situated about a quarter of a mile north west of the house). The monks were large farmers and on the Manor Home Farm kept cattle, sheep, pigs, mules, asses, horses, pigeons, ploughs, wheat, barley, oats etc and were served by a considerable number of cottagers, as well as free and customary tenants.

A comparison of the state of the Manor in 1086, 1294 and 1535 provides an important guide to the history of the village. In 1086 the Manor was assessed at 5 hides (800 acres). Attached to the land were 4 serfs, 5 villeins (customary tenants) and 3 bordars (cottagers). There were perhaps 70 people (if 5 to each family of tenants and 10 to a lord). The community consisted of the lord as sole proprietor, certain families absolutely slaves to him, others practically dependent upon him, with a certain freedom for the villeins.

In 1294 (in a valuation by the King’s Commissioners) the Manor had 6 freehold tenants, 3 villeins and 21 cottagers. There was also a community of 13 monks. The total population can hardly have been more than about 200. The status of the population had materially altered for the better. The serfs have entirely disappeared (perhaps absorbed as domestic servants of the Priory), while bordars and villeins have become cottagers.

By 1535 (when a return of assets and outgoings was made by the last Prior) there had been a further increase in population. The population increase was caused by the Manor being the Home Farm of the Priory and the monks being large livestock proprietors. Overall, it has been said that the community benefited from the “mild and industrious rule of the monks, turing the waste lands to profit, rearing flocks and herds, creating new industries, promoting learning and charitable deeds, and gradually emancipating the agricultural labourer.” (Hobhouse).

In 1535-6 the Priory was dissolved (there is no account of what took place). The monks were dispersed and the ecclesiastical buildings pulled down. The Manor, farmsteads and probably their domestic buildings were given to the Earl of Hertford (later Protector Somerset). The Manor House itself probably stands on the site of the domestic buildings of the Priory. The Earl of Hertford soon gave the Manor House and property to the Bishop of Salisbury. John Jewel, Bishop of Salisbury, and Reformation divine, died at the Manor House at Monkton Farleigh in 1571. The Bretons were lesees of the Manor House from 1547 to 1638. Later families who lived at the Manor were the Longs (of South Wraxall, originally a hamlet of the parish and up until the Dissolution of the Priory part of its Home Farm). They were succeeded by Mr. Wade Brown in 1842. He improved the parish roads, especially the road from Farleigh Wick Green to the village. In 1870 the Ecclesiastical Commissioners formed the Manor into a freehold estate. The House was sold in 1873 to Sir Charles Hobhouse, who wrote a history of the parish in 1881.

The Manor is a large house of irregular plan, the earliest part of which dates from the 16th century. The mullioned windows have been renewed and above them are carved 12th and 13th century fragments from the adjoining monastic site. Further additions were made in the 17th century. In the first half of the 18th century extensive additions were made on the east side of the building, the earliest buildings being remodelled by Wood of Bath. Internally, the principal rooms have 19th century chimney piece and decorations.

The parish church was largely rebuilt in 1844 by T. H. Wyatt. The earliest part is the late 12th century north door, while the tower and font also formed part of the older structure. The Church is ledged above the yard and buildings of Church Farm, while above it tower the octagonal chimneys of a Victorian Rectory. From 1334 the patronage was with the Priors of Farleigh, and later (after the Dissolution) with the Bishops of Salisbury.

The community was made up predominantly of farm labourers, although there were also clothiers, weavers, maltsters, tailors, shoemakers, carpenters, blacksmiths, grocers, thatchers etc. There are no registers of occupations until 1700. By the 19th century there was a very rapid growth of the industry of stone quarrying and by 1881 Hobhouse stated that nearly half of the labourers were quarrymen. Bath Stone was sent by rail all over the country. In 1936 the War Department took over one of the quarries for ammunition storage. By 1881 there was still a parson, carpenter and blacksmith, but the community was increasingly dependent upon the nearby town. The population in 1801 was 264, in 1851 was 359, in 1901 324 and in 1951 516 and in 1982 500.

The buildings of Monkton Farleigh are principally two storey buildings, constructed of rubble or of coursed stone. They generally display tall, Victorian type chimneys, with stone slate or tiled roofs. Other points of architectural interest include stone mullioned windows and gables. The King’s Arms retains an early 16th century doorway with a 17th century two storey porch, with original windows and a corresponding projection at the back with a circular stair. The Fox and Hounds Inn at Farleigh Wick has curious courtyard and entrance pillars.

The Conservation area encompasses most of the village, generally following the roads which run past the village on its western, northern and eastern sides and includes the rear of the properties bordering this area. The village is generally very attractive and, with a proliferation of mature trees, blends into the rural character of the surrounding area. The village has escaped the encroaching process and has kept its basic integrity intact. 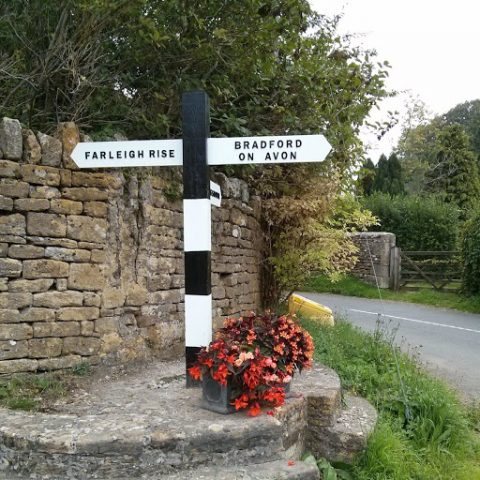